Creativity for the Masses

An amazing clip of David Bowie came across my Twitter feed. He was doing a press junket on the now-cancelled Charlie Rose Show in support of the film Basquiat (he played Warhol). 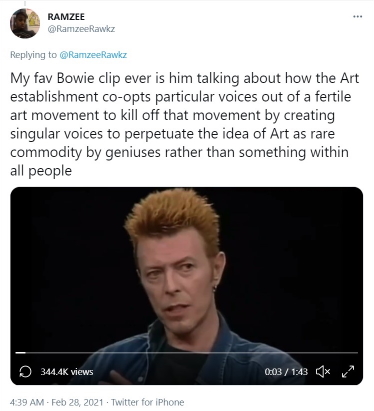 In the clip (full video along with Julian Schnabel here), Bowie discusses the fact that “high art” takes a chosen minority of artist (for example, Basquiat and Haring from the NYC street scene) and elevates them out of their movement into high art, to perpetuate the idea of Art as rare commodity by geniuses rather than something within all people.

Man does that sink home.

I’ve had similar experiences with math and science. I was lucky enough to “fast-forward” through math and physics classes in high school because great teachers took a chance and gave me an opportunity. I took that opportunity about as far as you’d want to. And when I discuss my history, I often get statements like “you must be so gifted, I could never do physics.”

And it’s just not true. Anyone can do it, if they are given the opportunity, instruction, and access,coupled with interest and intent.

Nothing makes that more clear that the work of playwright and math professor John Mighton. In the artist world, he might be best known for playing post-doctoral fellow Ted in Good Will Hunting (and is rumoured to have written the actual math in the film). But for me, it’s his TED x Cern talk and his work with Jump Math that shows that mathematics are accessible to everyone.

It’s the same with art. I’ve been painting and playing bass a lot during the pandemic. I’m not good, but that doesn’t mean that art is beyond me. I could become better with instruction and effort and time. Art is within me (and all of us).

I’m not saying everyone is talented at everything. I’m saying that with access, interest, and effort, we can all get to a level of facility that allows us to be good. We suffer from gatekeepers and arbiters preventing us from that creativity and joy for their own interests.

And it’s not just in the art world. It happens explicitly in my work. The tech industry idolizes a certain type of “hero” (young, male, usually white, went to the right school) who “just gets” computers. It’s who we hire and who we promote. And again, that gatekeeping exists to serve the interest of the gatekeepers.

« Chesterton’s Fence and the Records We Don’t Keep