“Plans are useless, something something …” – Eisenhower, maybe?

It’s that time of year again; retrospectives on 2020 abound. Obviously COVID is the major theme of the last year, but still, I think I should revisit what I set out as my goals in January. 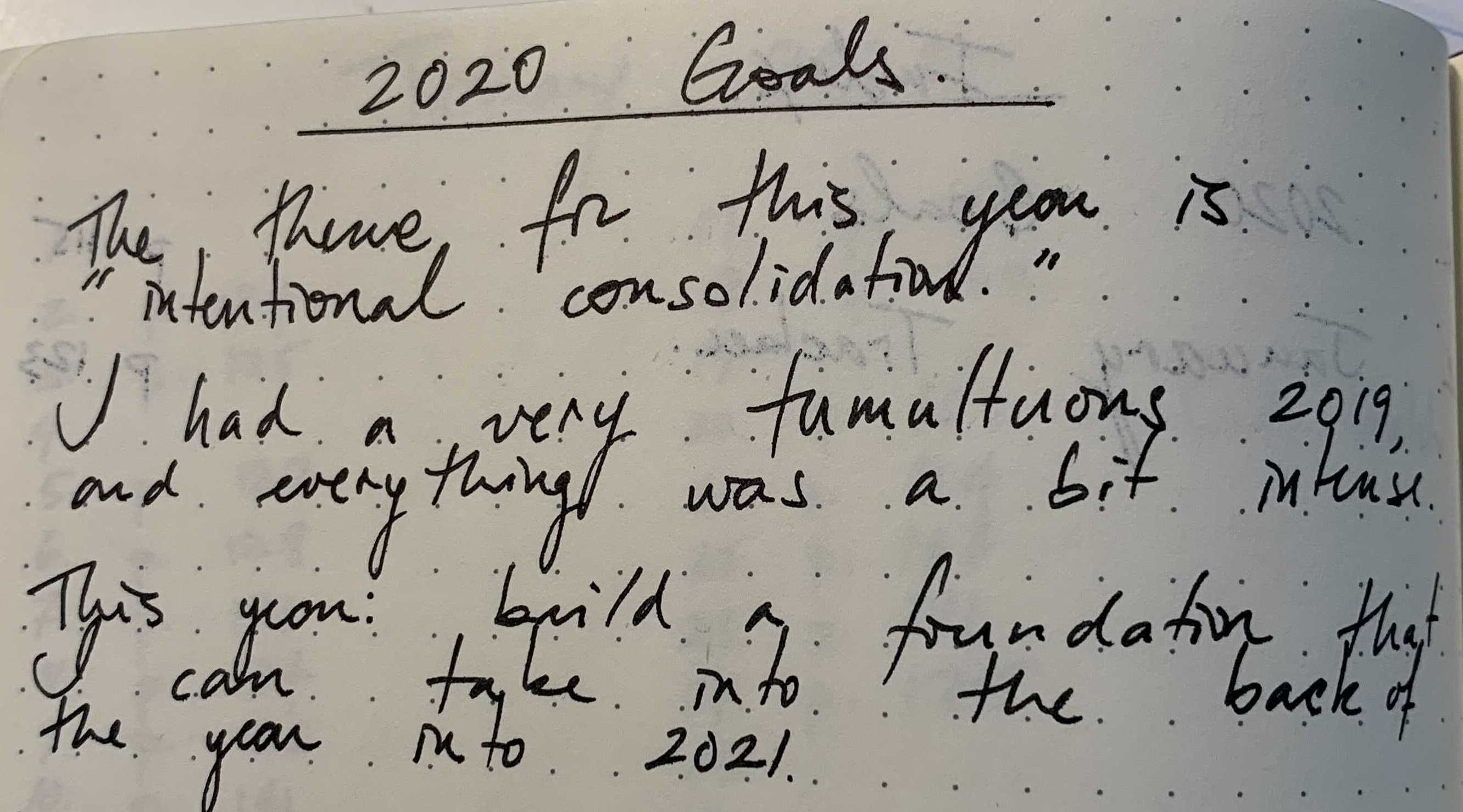 The theme for this year is “intentional consolidation.” I had a very tumultuous 2019, and everything was a bit intense. This year: build a foundation that I can take into the back of the year [and] into 2021.

Wow. I don’t think I could have got that more wrong. To think I thought that 2019 was “tumultuous.”

I broke down my goals into a few sections. Pretty ambitious of me ..

I’ll write more about fitness in a later post, but the main theme here was to “look better, feel better.” I rode the bike a lot, but I’m not sure I’m in better health right now. Part of the problem is that I didn’t really engage it the second part, which was “healthy habits” specifically drinking less. That went right out the window in lock-down.

The last piece was to look after my mental health. I journalled more, and did mindfulness nearly every day. But the real game-changer was starting to see a therapist. When I got back from Vancouver in September, I didn’t like how I was thinking about things; work, our relationship, and my place in my own life. Nothing major, but having a dispassionate person to talk to really made all the difference.

I wanted to get our finances in order, but again, the pandemic threw that out. We spent money on trying to keep sane, and ended up saving on travel, and the Boy’s camp and a bunch of other things (gym memberships, transit passes, etc). I’m sure we came out ahead, but the major thing was working at a company that was very well-poised to thrive in the pandemic.

(I did manage to consolidate my cell phone and internet bills)

“On track for Sr. Dev Manager”

I’m currently a Dev Manager at Shopify, and I would like to be a Senior Dev Manager. That role is roughly equivalent to the Director role I had at Wave; managing multiple teams each with their own leads or managers. I came into Shopify expecting to run a team and write more code, but I actually ended up managing multiple teams. So I feel I’m ready.

Part of the plan was to write more, both internally and externally. I hope this blog helps. Maybe I need a Substack?

Then I wanted to do more speaking. I had assisted my friend Ash facilitating a “Real Life Retro” at One Eleven at the end of 2019. I thought that would be the jumping-off point for more public speaking. Again, COVID got in the way.

The final part was “building people up” and I think I did a good job of that this year. One promotion, two more on the way, lots of hiring, and I feel good about where the folks on my team are at. April through to September were hard, but I feel the team is in a good place.

I’m trying to engage the other size of my brain a bit more. I decided I wanted to

I did manage to get a bass teacher and I am learning. I wasn’t able to play in public (sensing the theme?) but I’m still enjoying it. I’ve also started painting, just recently, so I can cross that off. The only one I haven’t really done is read more. I have a list, but I just don’t get to it.

I wanted to plan to renovate our basement. It was the last thing we didn’t do in our renovation because we ran out of money and we suffered from decision fatigue. We couldn’t get our act together before COVID to get started, so maybe that’s something we’ll pick up in the spring. I also said I wanted to build a temporary home gym, and I managed to get that done!

Overall? I think I did pretty well. This was not the year we thought it would be, and yet I managed to get ~half of my goals accomplished, including some surprising ones.

« Upgrading to Jekyll and GitHub Pages The New Year »